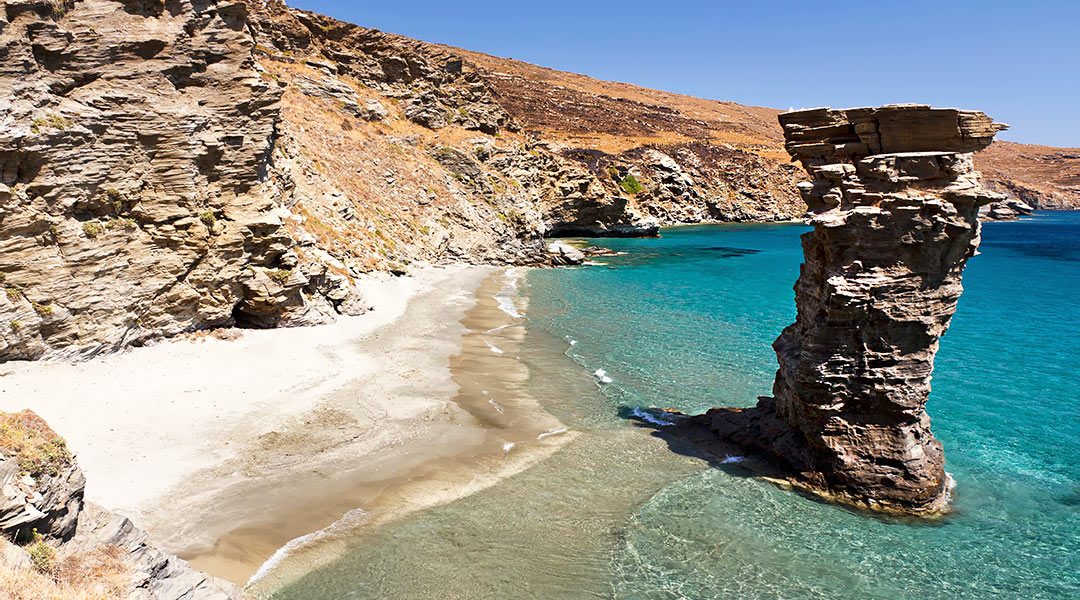 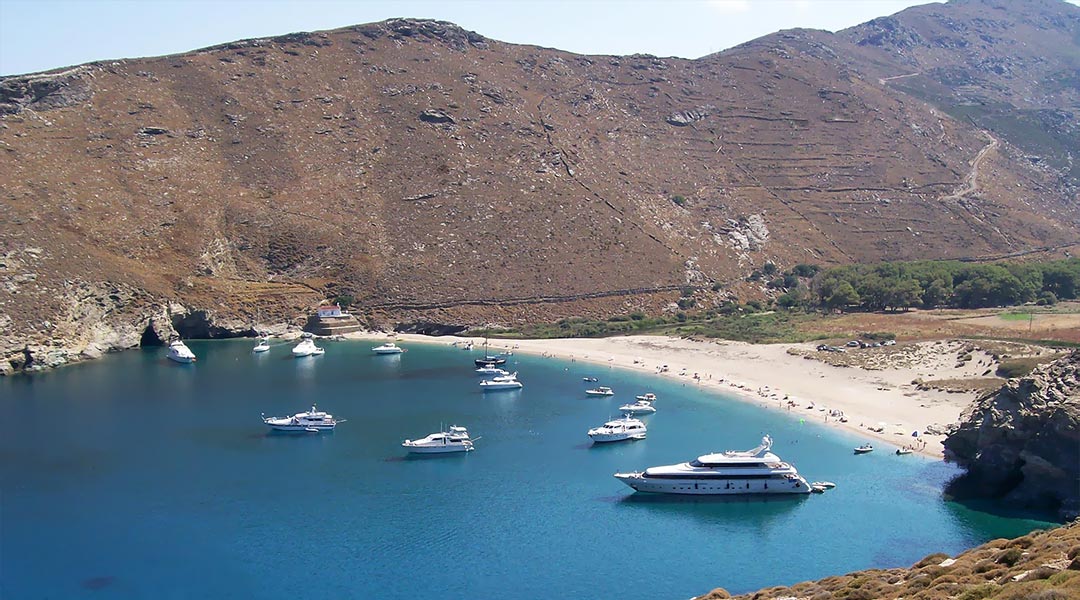 Achla Beach is a bit out of the way, and you’ll probably need a Jeep or motorbike to handle the dirt road there. However, if you can get there, the experience of Achla beach is absolutely rewarding. This is an intimate beach with a charming pebble shore and a landscape that largely protects it from the most extreme summer winds. The flora on this beach is unique to most beaches on Andros Island, Greece, its diversity of plantain trees and plants owed to the nearby river. This provides shade and freshwater experiences as well as saltwater and makes Achla one of the most unique Andros beaches.

This beach is left unorganized, though there are a few accommodations nearby. You can also see a small chapel and a lighthouse here. If you want to go snorkeling or fishing or just get away from the crowds for a bit, Achla beach is the place to go. You can also approach Achla beach by boat, exploring the small caves and islets nearby. 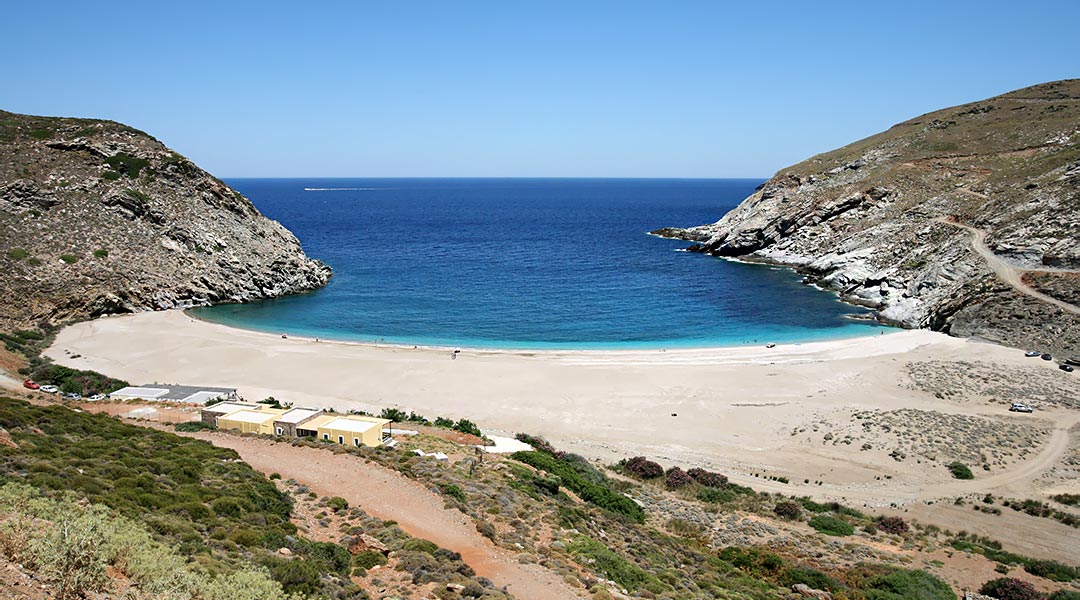 From A to Z. Unlike Achla beach, Zorkos beach is sandy and frequently affected by the summer winds, particularly in the afternoon. Like Achla, however, this unorganized beach — a good 40km from Chora — provides a secluded, intimate experience. It’s said that during the quietest times of day, you can only hear the waves, so if you’re looking for a place to unwind, this is it. Getting there isn’t difficult: it’s an asphalt road for most of the way that eventually turns into a dirt path to the beach. There are rocks and trees nearby that will help to keep you cool, as well as a tavern nearby open during the summer months. 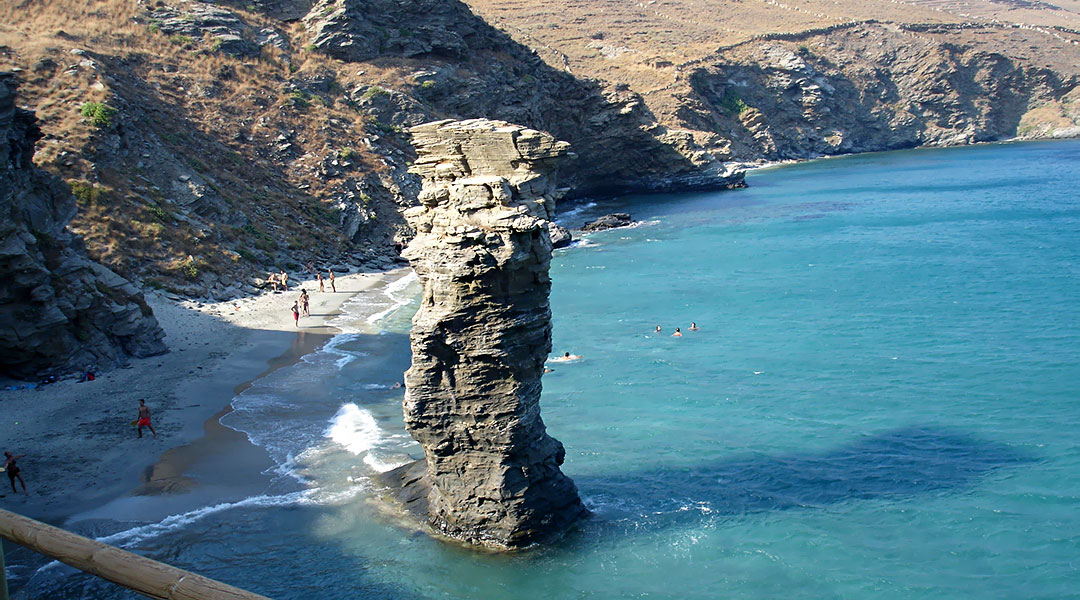 This is one of the most popular Andros beaches for tourists because of its quirk and the story that goes with it. Tis Grias to Pidima translates to the place where the old lady jumped. If the name doesn’t catch your attention, the views of this sandy beach certainly will. Deep blue waters meet white sand, not far from the port of Vitzi, and therefore not far from some Andros hotels. The unorganized beach is surrounded by cliffs and towering out of the shallow waters is the characteristic rock that plays into the legend of the place.

According to the story, an old woman was seeking refuge in the Castle of Kohilos. When Turkish invaders arrived, the old woman — whether by mistake or because she was sent by the Turks herself — simply opened the door to them. Regretting what she had done, she jumped from the cliffs. This tall rock stands where she fell, as the legend goes, and at a certain angle it does have a similar silhouette to an old woman in a scarf. However, this is just one of many versions of the legend you might hear if you ask. So when you visit this beach, you don’t just get to sunbathe and enjoy the water: you get some of the storytelling culture of Andros Island Greece. 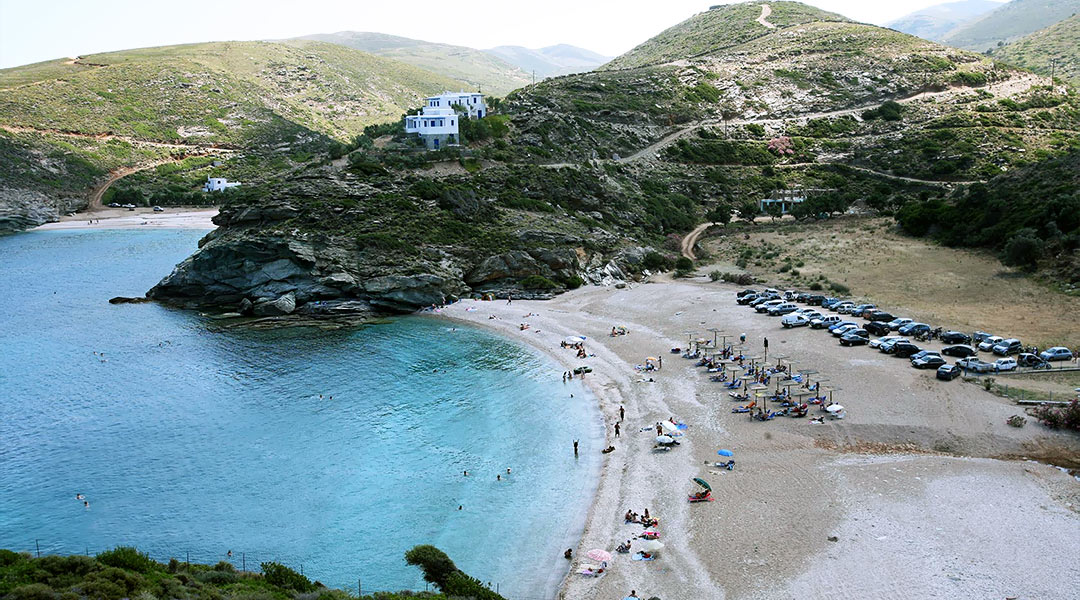 Vitali has a few accommodations, sunbeds and umbrellas, but is still largely left to its natural beauty. This beach again may be out of the way from your Andros accommodation and is mostly accessible through a dirt path by Jeep or motorbike. However, like the others, the journey is worth it. The nearby rocks offer shade throughout the day so you can enjoy the beach without being scorched by the sun, as well as a ledge that makes Vitali so popular for divers. There’s a tavern nearby open during the summer where you can find refreshments. The shore is a mix of pebbles and sand.

Though today it’s a small harbor for fishers and yachts, Niborio beach was once a major harbor for Andros Island, Greece, and you can tell. This is the closest beach to Chora of the list, just 300 meters away, so there’s a good chance you won’t have to venture far from your Andros hotel. The shore is partially organized and sprinkled with cafes and tavernas, but not so much as to make it feel overcrowded. The shallow waters are clean despite all the boats and perfect for swimming or a family outing. You can even see some of the packs of buildings of Chora in the distance. The rest of the beach is left unorganized, so that despite its popularity and easy access, this beach actually feels very peaceful and quiet.

Syneti beach is in between Chora and Korthis, making it one of the most easily accessed Andros beaches on the east side of the island. It’s a shady pebble beach, a reprieve from the intense summer weather that beats down on Andros Island, Greece. The nearby mountains give it a rugged landscape and make it yet another perfect destination for diving. Snorkelers will also enjoy the underwater caves that can be found here, and of course everyone can enjoy the freshwater springs. There’s a restaurant and bar nearby, ensuring that you find everything you want from Andros beaches at this very beach. 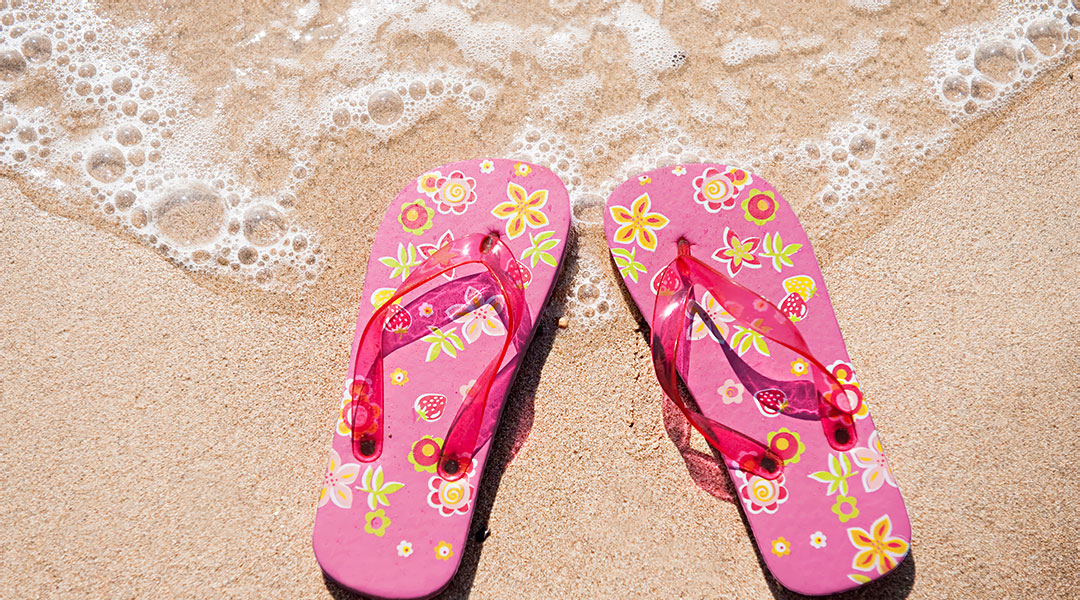 Vori beach is further out from Chora but easily accessible enough by boat. It’s among the quieter Andros beaches, lined with high, romantic cliffs that’s made even more interesting by the remains of a nearby shipwreck. A lush valley surrounds this scene, courtesy of a nearby river. Another consequence of that river is the occasional sight of sea turtles. For adventure lovers or just those who want to see something out of the ordinary, you can’t miss Vori beach.

Andros beaches on the east side of the island are full of charm, intrigue, and romance to spare. When planning your trip, talk to us about the best beaches you can visit in the area.