The Castles and Towers of Andros Island, Greece 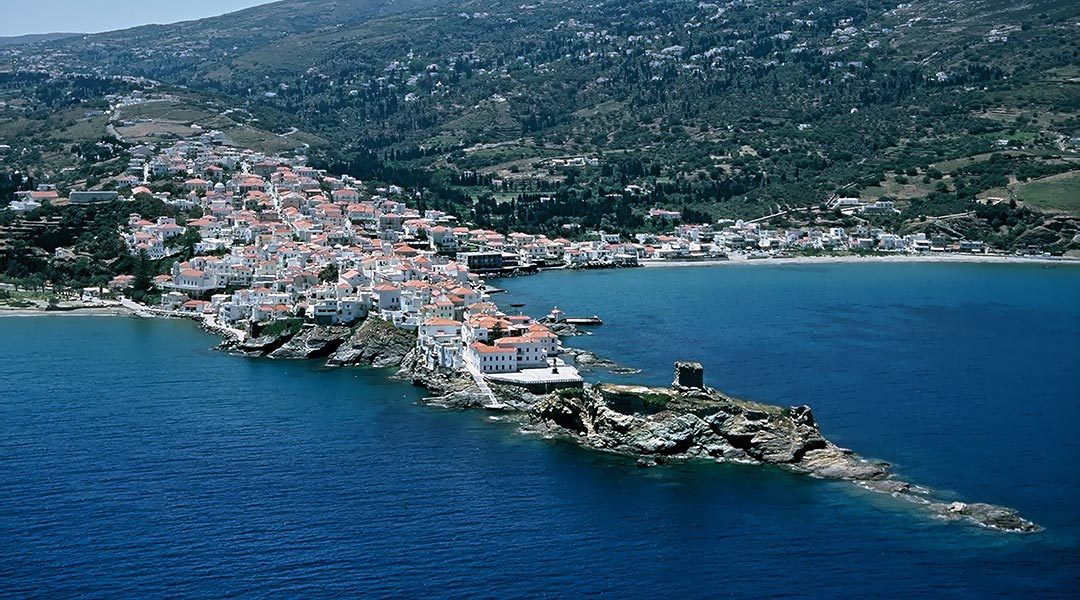 Andros Island, Greece is a unique Island among the Cyclades. Located southeast of Euboea (Evia) and north of Tinos, it is about forty (40) kilometers long and sixteen (16) kilometers wide, with 176 kilometers coastline. It is a combination of Dry Cycladic Landscape with the abundance of water. It is highly mountainous and a great place to go hiking.

Apart from this wide range of geographical and morphological attributes, one other feature which adorns this island and contributes to its uniqueness are its castles and towers. Also, you need not be bothered about accommodations when you decide to check out any of the below listed architectural edifices; there are a lot of hotels in Andros where you can lodge in. 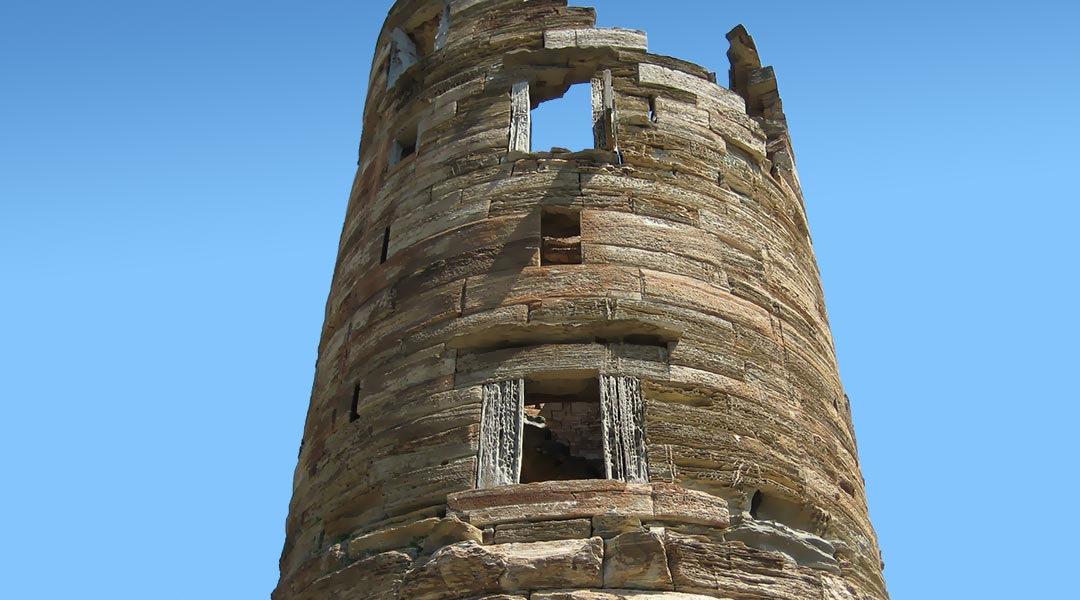 Located in Gavrio, this 20 meters high tower was built in 3rd or 4th Century BC, a period widely referred to as the Hellenistic era and is why it is sometimes referred to as the Hellenistic tower of Agios Petros. It is made of local Schist, cylindrical in shape with a 9.40 meters diameter and five floors which were interconnected with a spiral ladder. Considering its structure and shape, it was probably built to serve as an outpost for getting information about imminent enemy invasions and pirate attacks in order to be better prepared and protected. The area in which it was built had copper mines which were still functioning till the mid-20th century thereby contributing to its economic development. Therefore, its major function is to protect the mine and its workers. The tower is located about 15 minutes’ drive and a walking distance atop the hill from Gavrio.

Another Andros Greece Tower is the Bistis – Mouvelas Tower. It is the oldest of the Andros Island House Towers trend in 17th-19th Centuries. Built in the 17th century by Stamatelos Bistis, also known as “Mouvlelas” meaning representative of Turkish Kadi. It was built between a674 and 1696, shortly after Andros was looted by pirates and the rich started searching for safer places in the Island. It was built over an older middle age tower from the 13th century. The Bistis – Mouvelas tower was later supported with two side walls in the 19th century thereby expanding the size. Since 2006, the tower has been the property of the Municipality of Andros although it is now totally neglected and derelict.

Also Known as Castle of Faneromeni, Castle of Gria, or Castle of Kochylos, Pano Kastro which means ‘Upper Castle’ was the largest of the middle age city-fortresses of Andros. This Andros Greece Castle is built on a plateau at an elevation of 560 meters and great natural protection, it has the ability to provide protection for up to 1000 people at a time. It is widely regarded as a Venetian fortification, although there is a possibility of being occupied since the Byzantine period and only developed and fortified after the 13th century by the Venetians. It is strange that defied one of the three, Venetian Andros Greece Castles, There is no record of a special occurrence in the city’s history. The Pano Kastro Castle never attracted a large number of people in the calm period and was probably abandoned in the 17th century, with the extinction of piracy.

The Castle of Chora (Kato Kastro or Lower Castle) 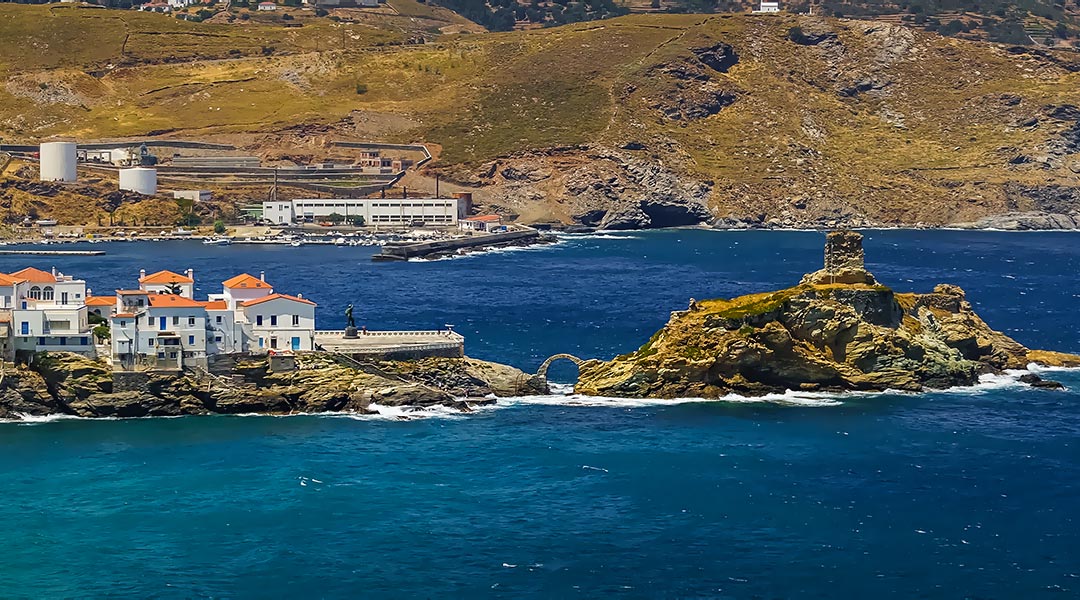 Located on a small peninsula and islet, it was at the eastern part of Andros Greece at the location of present-day Chora. It is a natural protection site as it is surrounded by water on its three sides with the western side looking towards the mainland. It is called ‘Kato Kastro’ in Greek which translates to Lower Castle with the aim of distinguishing it from Pano Kastro, the Upper Castle. Its part on the mainland is often referred to as the ‘Mesa Kastro’ which means Inner Castle. Built by Marino Dandolo after the capture of Andros Island by the Venetians in 1207, it is one of the three Andros Greece castles built by the Venetians and the most notable one in the Present day. The Ottoman navy conquered Andros in 1566 and the Castle’s use became infrequent. It remained in good condition till World War II before the Germans bombed Andros’s port in 1943 and it was almost destroyed totally. The Castle of Chora was once one of the notable Andros Greece castles; however, despite being ruined now, it is still one of the major tourist attractions In Andros.

The Tower of Vlychada

Another Andros Greece Tower is the Tower of Vlychada which is built at the northern end of the Vlychada beach, Western Andros. It is a deserted Venetian Tower believed to have been built in the early 15th century. It is the smallest of the three Venetian towers and was used as an outpost as its location is very essential to navigation.

Whenever you are checking out any of this towers, do remember that there lots of Andros Greece hotels which can cater for your accommodation. Andros hotels include the Villa Bella Vista and the Eleonora.